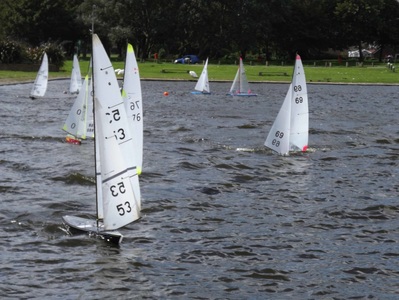 The reintroduction of a two day National Event saw 12 skippers from 6 clubs and included three new yachts, together with four entrants very new to the class.

The first day was dominated by Colin Goodman, recently crowned E. District 2002T winner, who won all 21 races in the very blustery conditions with some excellent skill. With the wind

Behind Colin, Jon Alexander was the most consistent of the chasing pack which included Dave Green, Class Capt. Mike Ewart and Terry Burton. With the wind still blowing hard 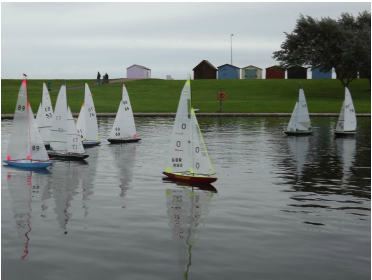 The second day was the exact opposite of the first and Course maker Robin Bloyce continued to set very good windward legs and fair start lines under extremely trying
conditions. Four skippers had now retired from sailing but Gary Clover returned to the fleet after repairing damage sustained on the first day. Terry now showed the skill of a former 6m Champion by winning four of the day’s seven races, whilst Geoff Raygada and Vinnie Zammit also had much better performances in the lighter airs. Colin went on to win in a most convincing fashion. Jon finished second for the second time in the last three years with Terry third.

With pouring rain and no wind OOD Mike Collins, after consultation with the fleet and his team, abandoned the day’s sailing.

At the Prize Giving the OOD thanked all skippers and his team for their part in a most enjoyable event, despite the weather.

Colin thanked H&DMBC for staging the event and his fellow skippers for a most pleasing competition.
Mike Ewart at the end of the proceedings mapped out the future plans for 6M class, which were favourably received.