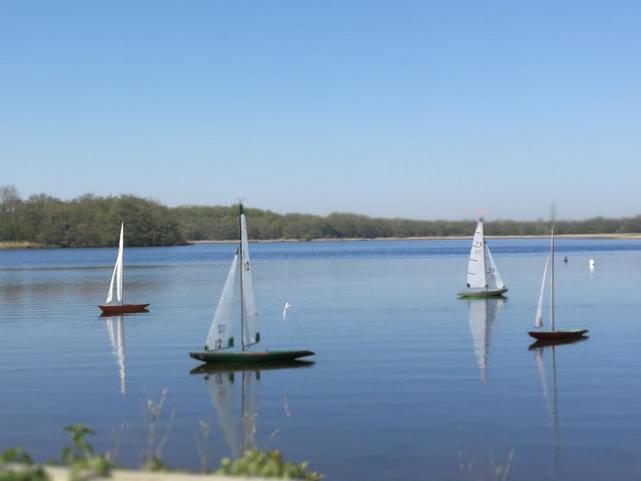 Nine sailors of the Radio Six Metre class met at the Broads RYC on the 6th May to compete for the Shearwater Trophy. There were six local lads fromthe Broads club, one from Norwich, one from Abington Park and one who’d travelled all the way from Fleetwood (they’re keen these six metre sailors).

It was a lovely warm, sunny day but the wind, such as it was, couldn’t quite make up it’s mind which direction it wanted to come from and throughout the day it wandered between due north and due south but hovered mainly around the east and so had to come through the trees to the right of our
control area which meant that it was light and very shifty.

This had Race Officer, Pete Sutton, scratching his head about how to set a decent course and he spent some time out in the recovery boat laying marks and testingthe wind strength and direction. Eventually he felt that he had set a reasonable course and racing began. Broads club member Bernie Guest won the first race, with Shaun Holbeche second. Terry Burton took third place, Vinnie Zammit, fourth - sailing a borrowed boat, Neil Cousins - first outing for his six metre - took fifth, John Hanton sixth, Mike Ewart seventh, Tony Garner - also with a borrowed boat - was eighth and Mike Howard retired from that race with a technical issue.

The first race demonstrated that Peter Sutton’s painstakingly set course was in fact next to useless -he’d have pulled his hair out if he had any - so a dramatic course change was carried out based on a sort of average wind direction and apart from a couple of minor adjustments later on, the course remained the same for the rest of the day. All skippers showed great forbearance in the very shifty, light airs and racing was conducted in a very fair and sporting manner.

We broke for lunch at about midday and enjoyed a very relaxing 45 minutes or so and a very nice meal in the Filby Bridge Restaurant before completing the afternoons racing, finishing just after 4.00pm. Shaun recorded 5 wins and ran out the winner, Terry 4 and took second place, Vinnie with 3 wins was in    third place, Bernie had 2 wins and filled fifth spot and Mike Ewart with 1 win was fourth. The full results are associated with this report.

​ The Shearwater Trophy is an annual event and is always a great day out so if
you have a six metre give us a try next April, you won’t regret it.

Right click on this image for better viewing options.