Sextant Trophy, 24th October 2021, Lea Valley MYC
and final round of the 2002 Trophy
A small fleet of three Ravennas and two Kalulus arrived at Lee Valley to compete for the Sextant Trophy.
Ravennas are well known but the Kalulus are new to the scene.  They are a design from 1929 and as such have full keel with the rudder hung off the back.

This makes them ideal for avoiding the weed which the Lee Valley lake is plagued with from July to October. They are however  rather tender and heel a lot as the wind picks up.

The weed has at least shrunk down to below 6 metre keel depth but the local swans, coots and moorhens still fetch it up for the boats to catch as the Ravennas found. Having said which Shaun somehow managed to miss it most of the time whereas Steve and particularly Mike collected more.

The wind varied in strength and direction which made it impossible to set an ideal course but there was at least an almost regular beat to the windward mark. Most of the time the Kalulus could keep up or beat the Ravennas provided the skippers were alert which by their own admission was not all of the time.

Shaun  quickly got the measure of the conditions and as a result won 12 of the 16 races. Others had their moments and all bar Mike won a race or two. It was agreed by all to stop after 16 races.

Scoring was done manually and I got most of it right but slipped up toward the end so the final results published here are a little different from those announced at the end.

It still leaves Shaun a very clear winner while the others are not too far apart.
All "discussions" were settled on the water which made life simple for me and Derek Davies as the Race Team.
​

The event is the final round of the 2002 Trophy Series for 2021 but it seems that nobody has been keeping the series scores.
To complicate matters boats without valid certificates were allowed to race in the other two events which is permitted by the Series Rules but they don't get Series points.
It was not completely obvious which boats these were but I think that I have managed deduce it from the reports and other knowledge.
I announced the final results at today's event but having had another look at the evidence have made some more adjustments so once again those announced were a bit in error.
That does not detract from Shaun's achievement of winning all three events so he is a clear winner of the Series.
Not surprisingly he is followed by Mike Ewart and Steve Wheeler who were the only others to compete in all three rounds.

The trophies were presented by Lee Valley Commodore Norman Clarke. 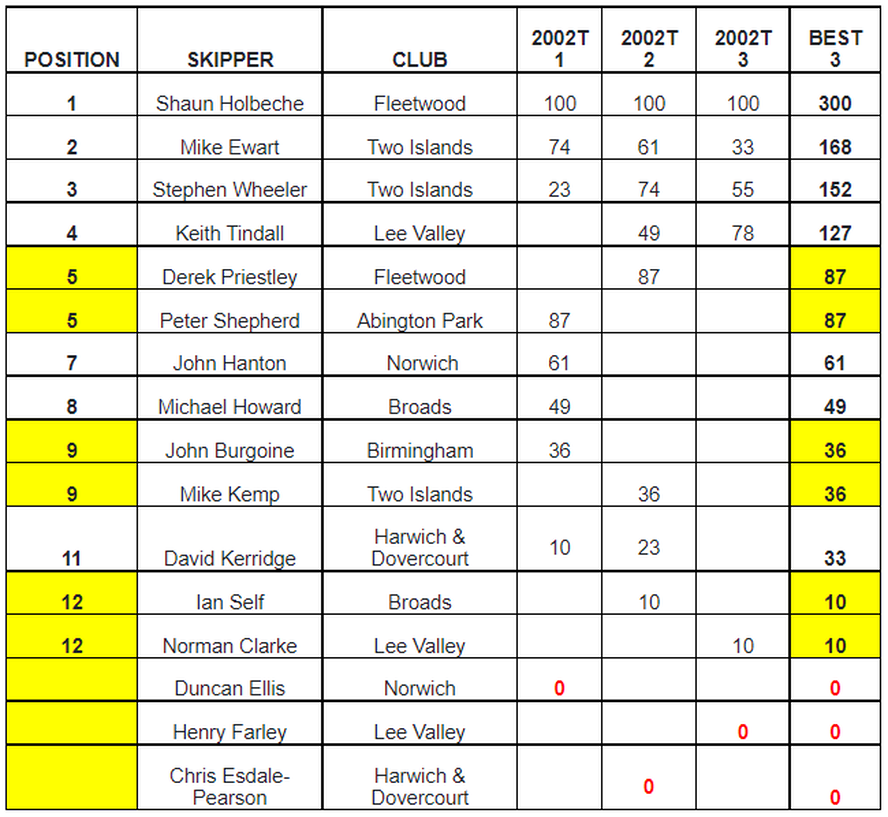