Visitor’s from as far afield as Buchanness and Fleetwood clubs joined the Dartmoor MBC fleet boats to contend this year’s National Championships. Most of the competitors took the opportunity to go through scrutiny on the Friday afternoon preceding the event, which resulted in a more relaxed atmosphere on the first morning of racing. 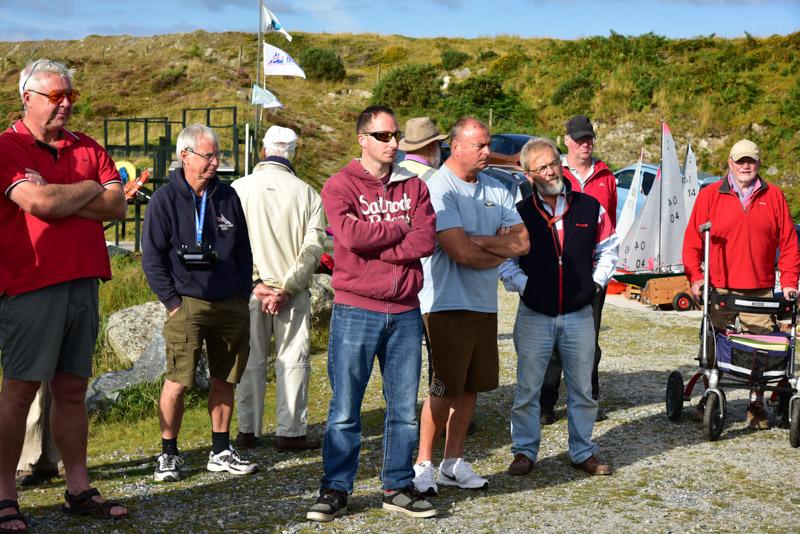 DAY 1 - Whilst the race team moved buoys around on the lake to cater for the forecasted veering SSW wind direction most competitors enjoyed the sun engaging with each other and talked boats. This was not the case however for Graeme Harris, the owner of local Tias designed boat (34) which experienced winch failure. As others watched on a new winch was installed only for that to fail as well, sometimes things just do not go to plan do they!

Experienced Principle Race Officer Peter Cropper got the first seeding race underway on time on the windward/leeward gated course down the east side of the Lake. This is probably the most difficult side of Shaugh lake to use because the available course length is quite small and minor wind direction changes can be difficult to read. Having said that the good skippers always find the right course to take and in the early heat races a noticeable ‘A’ Fleet pattern emerged where Graham Bantock (53) and Shaun Holbeche (16) challenging each other for line honours. 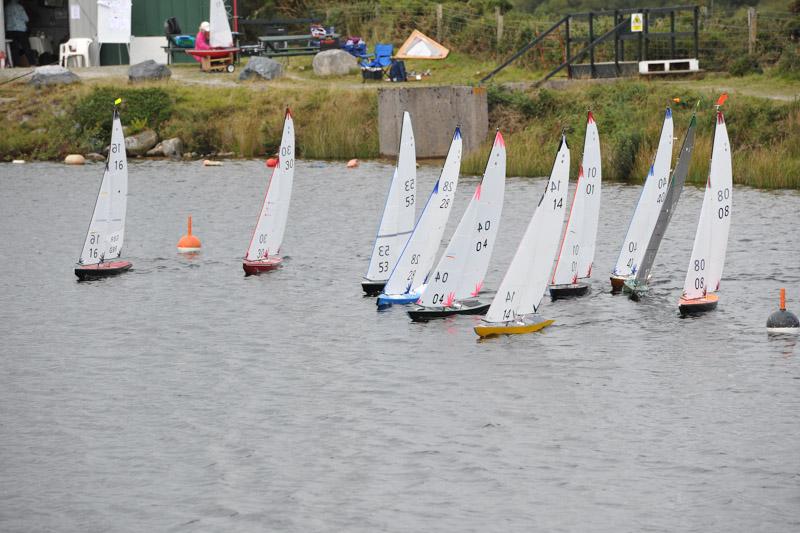 Local pundit Richard Wills using the new Romanza (14) from the John Kiff stable was also chasing hard and swapping places with John Taylor’s Drisky (28). Further down the fleet Stan Cockeram (1) was having an up and down day as was the local SW Champion boat 30 which was on loan to James Scrimshaw.
In the Classic division the two local Dolphin designed boats belonging to Martin Smith and Tim Nicholas were scoring around the middle of the fleet with Tim having a slight lead at the end of the day. 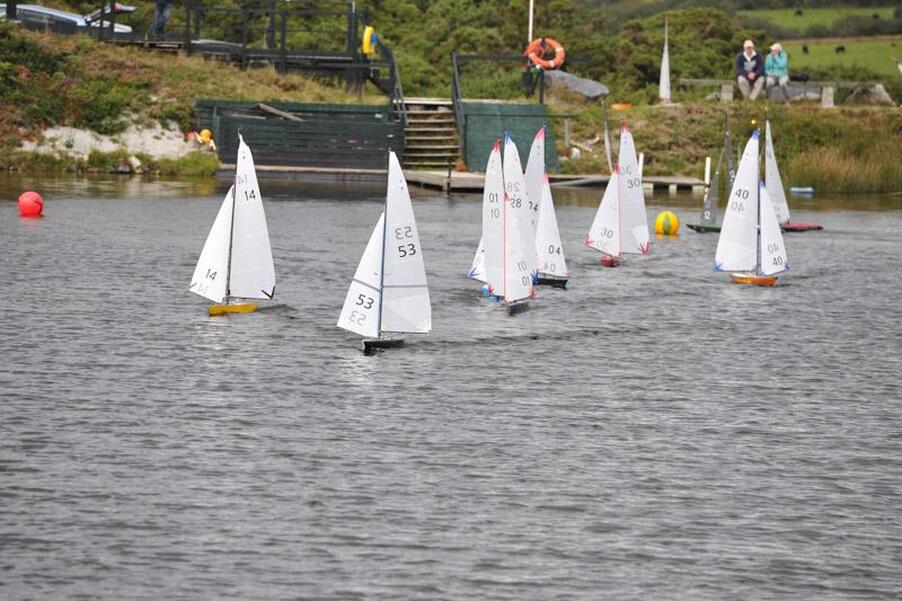 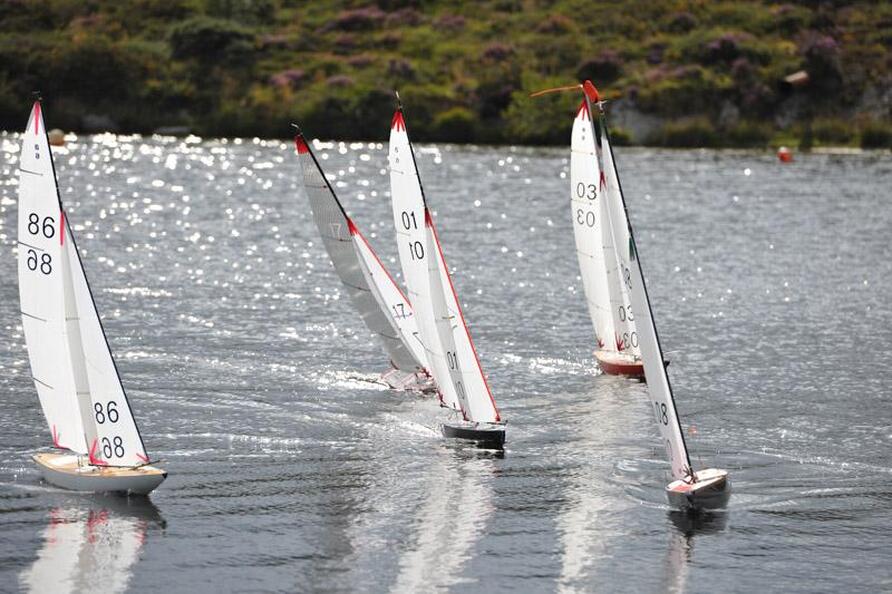 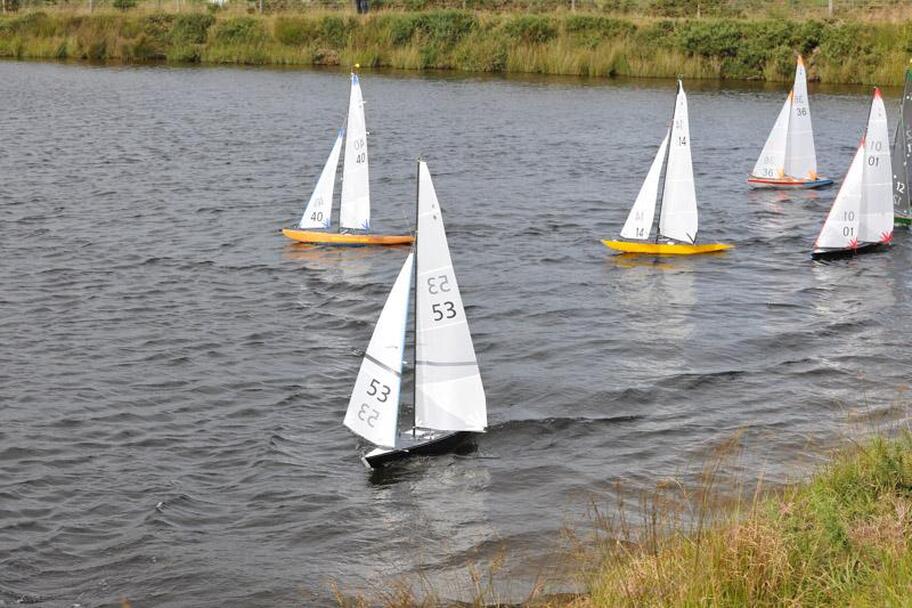 After the lunch break when the competitors enjoyed the remains of the previous nights Moorland hotel buffet dinner, racing resumed. By this time the wind had stabilised in the SW allowing the south control zone and the full course length of the lake to be used.
​On the race course the race leaders remained the same but further down the fleet things were getting up close and personal between the Blue hulled Drisky of John Taylor and the Fruit Salad coloured Romanza of Richard Wills. With contacts, entanglements and failures to finish redress protests went in and were quickly dealt with, which resulted in average points being awarded to Richard in two races. 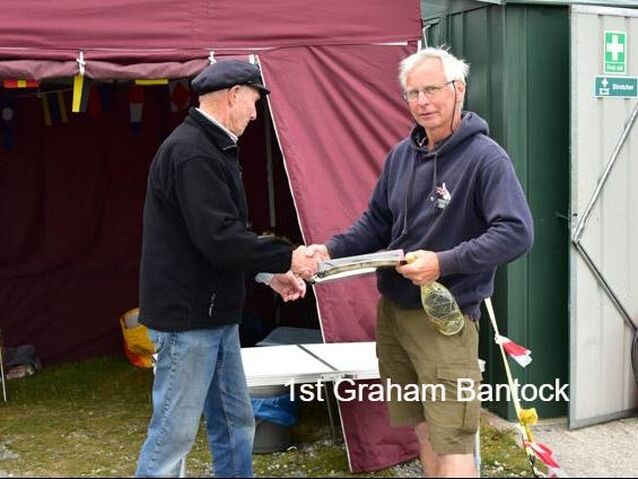 ​Congratulations to Graham Bantock who received the Championship winning trophy from the Club commodore Tom Eaves. 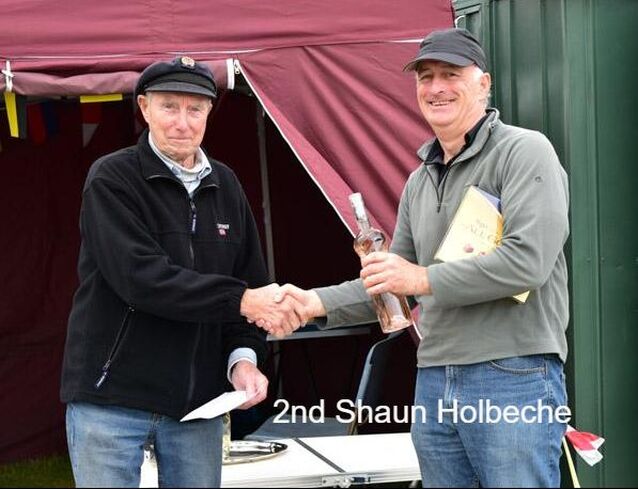 ​ The score line shows   just how dominant   Graham was, but does   not reflect how hard   Shaun Holbeche in   second place tried to   close him down   enabling him to win   two races. 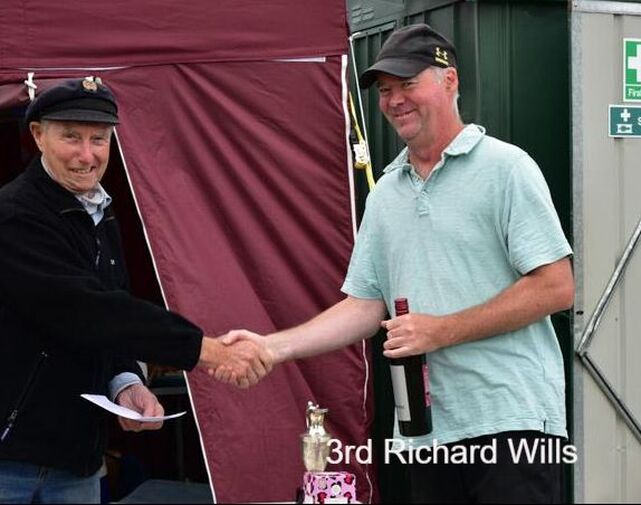 Richard Wills from the home club took third place from John Taylor who used to race IOM’s with the host club.

Mike Ewart who is also no stranger to the Dartmoor Club took fifth place and will no doubt be back again next Year to try to win the SW Area trophy which has eluded him on several occasions.                               Sixth place went to the very keen Doug Penman from Sedgemoor. 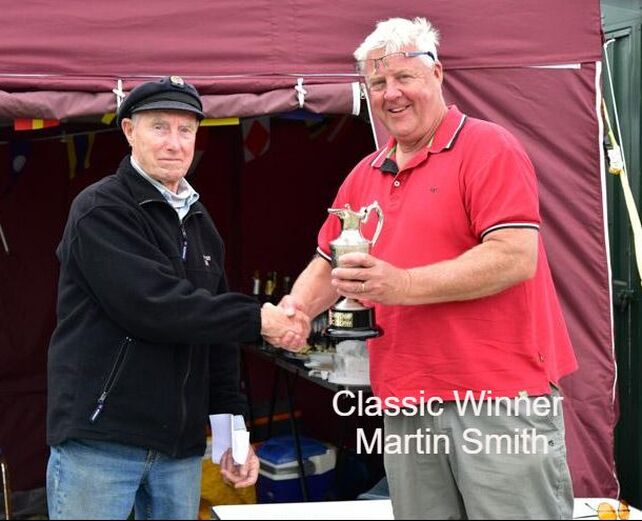 ​In the Classic division the newly awarded Perpetual ‘Old Jug’ trophy went to Martin Smith (03) who got the better of the overnight leader Tim Nicholas (86). The first lady helm prize went to Helen Cockeram from Solent RCMYC
In his championship winner’s speech Graham thanked Dartmoor for hosting the Event and also for its general friendliness and hospitality towards the competitors.

On behalf of the club and its membership I would like to say what a pleasure it has been to host this year’s National Championship and to praise those who competed in it for their sportsmanship both on and off the water.
Thanks to everybody from the Club who was involved in the organisation and with the on the water running of the event.
Special thanks to the City College Plymouth and to the Babcock International degree course apprentices for their work on providing 4G coverage at the club. This equipment was used to good effect for the first time during the event as a link to the emergency services.
Finally, thanks to the 6M Association for selecting Dartmoor MBC as a venue and the club hopes that the class will return to it for its National Championships at some time in the future.