report by Geoff Raygada
Pictures by "the ensemble" 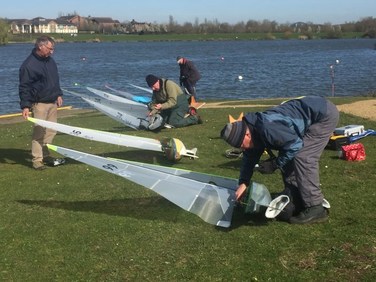 The weather forecast had looked promising all week for the first visit of the year to Furzton Lake, the home of Two Islands RYC for the 6M . Indeed on the day it proved to be a day that race officers only dream about, if initially a little chilly , with a beautiful lake that stays weed free all year, an almost cloudless blue sky and a stiff breeze . As a bonus the wind was blowing from a North North Easterly direction, blowing diagonally across the lake, into our faces, missing any obstructions, with none of the usual wind shadows caused by the two Islands.
Mike Ewart had a pretty easy job as race officer, with only two buoys to slightly re position, it was an easy task to set a fair course with two excellent and challenging beats, giving skippers the choice of whether to hug the bank or tack early and stay out in the middle of the lake, both paths having their merit. 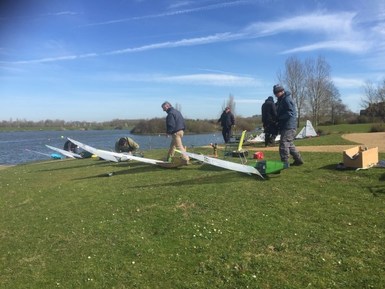 Mike opted for a simple triangle / sausage course, with decent length legs which all stayed within a comfortable viewing distance, making full use of the bay, which is usually plagued by turbulent winds from the nearby houses and island.
The entry list was a small but select band of gentlemen, representing in almost equal numbers the three local clubs, of Two Islands, Abington Park and Emberton Park, although all these skippers are at the same time Two Islands members.Two visitors , John Burgoyne and Peter Salt, from the Birmingham and Bournville clubs completed the fleet.
Due to the compact fleet and the friendly nature of 6M racing , Mike was able to combine his role of PRO and competitor without difficulty.

After a short briefing , and comfort stop, the racing got under way at approximately 10:00 am and under almost ideal conditions we managed to get eight races in before lunch time. Each race lasting around the ten minute mark there was enough time to allow a little fiddle or tweak between races when required, sadly a couple of skippers had some early problems, with Peter Salt struggling with his radial jib fitting and John Burgoine developing early terminal winch failure in a wooden Rococo, borrowed from the collection of Mike Ewart , which robbed us of some good competition. Who said that you can't have too many 6M yachts? 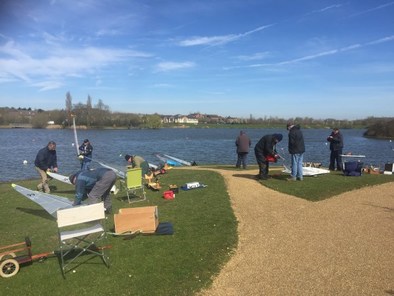 The wind gradually increased in strength throughout the morning to a point at which most of us were overpowered but with only a couple of races until lunchtime the decision to change rigs was left to see how the wind behaved.
With still a strong wind by the end of lunch break, those of us that had smaller rigs, changed down to reduced leech, skinny mains, which helped control, without impairing boat speed
Sadly John was to leave us early in an attempt to replace the winch in time for Sunday.
Worryingly , with another terminal winch failure, Keith Bell took an early bath, which left him free to record the results but after a few missed races Peter Salt managed to get his Siskin back on the water only to loose radio at a later time, luckily only resulting in a short walk to retrieve. 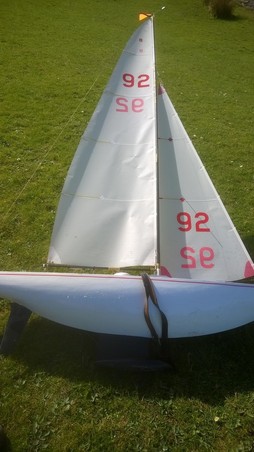 Of the nine boats entered, seven were from the drawing board of Graham Bantock, with two Romanza, two Ravenna and three Rococo designs, the other designs comprising of Keith Bell's Tias and Peter Salt's John Lewis designed Siskin. Unfortunately as these were boats that suffered from early technical issues, it was not possible to see how they compared to the other designs, but it would be fair to say that Keith struggled to tame his light weight Tias which is far happier in calmer conditions.
The difference in boat speed between the other three designs was minimal, now that the other two Peters have got their Cheeky Girls, Monica and Gabriella to behave themselves with some dignity in public.

Everybody had their time near the front as well as the back of the fleet. That is near rather than at the front, as nobody could get near Mike Ewart, who was sailing excellently, even when taken out at the start, he managed to work his way to the lead.
It was only after it was pointed out that a clean sweep , like a hole in one would mean a round of drinks, that he let Colin Davies win the penultimate race.
The racing was very close throughout the fleet with everyone having positions front back and mid fleet, with Peter Shepherd having slightly more races at the front than the rest of us, with fellow Romanza skipper Peter Jackson only four points behind.
Only one point separated Colin Davies and myself, with Richard Dolman some way behind due to the fact that he was forced to miss the last six races, again due to gear failure.
With a great start to the 6M season with ever more boats being built, a new Siskin being planked in Cedar, by regular competitor, Paul Risdale and two new Romanzas for Mike Ewart and myself, to name three, the class is looking healthier than ever, thanks in no small part to the efforts of class captain, Mike Ewart, and the two Peters, who spawned a new family of Cheeky Girl, look alike Romanza. Next Six Metre Open Event is Shearwater Vase held at Broads RYC , April 16th 2017, Entry now open on the MYA website. 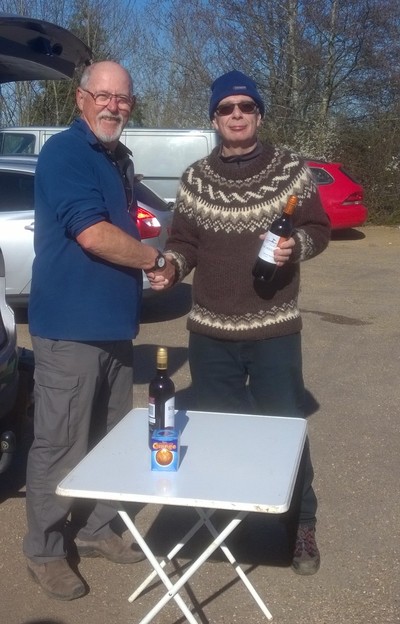 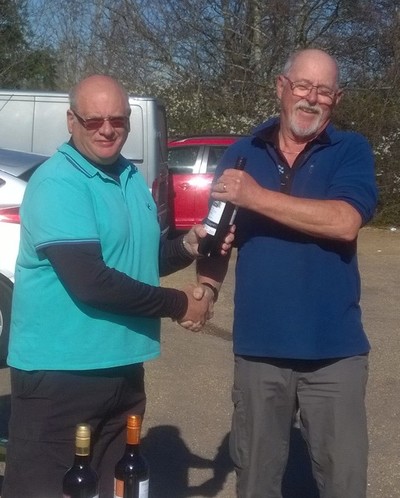 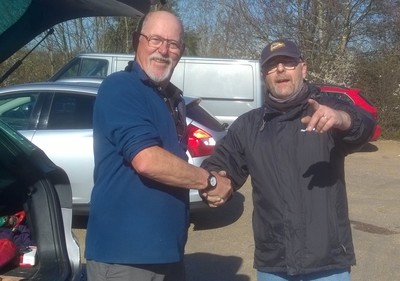