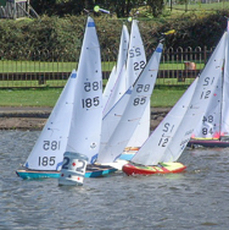 These notes about 6 Metre class designs by Graham Bantock is taken from the longer set of notes which covers all design by Graham.

To aid clarity, different styles of text have been used throughout this document to help identify the availability of the various designs.

This design has performed well since it first appeared with the prototype winning the UK champs in 1992, 1993, 1994, 1995, 1996, 1998, 2002, 2003 and 2005. Its direct predecessor, Northern Lights (No 5 design and no longer permitted by class rules) won in 1997 thanks to its soft profile/non bulb keel which did not foul on the weed prevalent at that event. The only other boat to come close to beating RENAISSANCE at championship level until 1999 (an OCTAVIA won) was a sistership in 1995. There are currently no plans to produce a replacement design for production at SAILSetc but the moulds have been sold to Ian Cooke who has placed them with Ray Baker of Gosport. The prototype has been modified by the addition of a new fin keel, with a section similar to that used on our Marbleheads and One Metres, and a new rudder from the same mould as our Marblehead and One Metre rudder. The prototype and one other RENAISSANCE have been modified at the bow to regain the sail area lost due to the drop in displacement due to the lighter and thinner foils.

A design which has been around for almost as long as RENAISSANCE. The underwater lines are very similar but the overhangs are reduced so that the boat has more sail area. A very competitive boat with the edge in light airs up to the point where RENAISSANCE takes over. There are apparently sources of hull mouldings the quality with which we are totally un-responsible for!

OCTAVIA (No. 8) - 1995 A design produced in 1995 exclusively for Nigel Fordyce and based on RENAISSANCE. It is in fact a narrower version with more sail area and perhaps even prettier for being narrower. Planked in balsa and covered with glass it raced at the 1997 National Championship and was sold to Richard Rowan. Richard won the 1999, 2000 and 2001 national championships with this design.

An up to date variation of the earlier designs aimed at home construction using planking as the method. In fact this design checks out on the VPP at the top of the heap of the most competitive designs. Observed performance tends to support this as these boats give good performance across a wide range of conditions.

This design relates to ROCOCO as RENAISSANCE does to REVIVAL. The mould was made by Barry Chisam with the option of the SAILSetc design fin box moulding supplied or fitted. Mike Barr of Paisley Club drove this project which contributed to club funds as well as placing a new design on the market. Mike’s own boat won a well contested open event in the hands of Paul Jones in 1999 and since then other owners have fared very well with their new boats.

ONE-OFF for Porter Loring (No 11) - 2002 The opportunity to build a one-off to the designs currently being worked on as the possible next production boat came up in 2002 when Porter Loring wanted a 6 Metre to add to his growing collection of boats, SAILSetc and other. The hull was planked by William Mazzotti of Ravenna and completed by SAILSetc. After Porter passed away the boat has been sold on in the USA.

ROMANZA (No 12) - 2009 Lines of this boat were finalised in August 2009 after being developed using the VPP to optimise performance to give it the best chance of success across a wide range of conditions against the other designs listed above. Progress has been slow on this project, unusually so as optimising a design using the VPP as a comparative tool for the various candidate designs can provide a very focussed path towards a ‘better’ design. The task seems more complex in the 6 Metre class partly because of the nature of the rating formula and, in this specific case, because the ROCOCO design is rated by the VPP as an extremely strong one across the range of conditions. This was both pleasing, because ROCOCO was drawn without the ability to use the VPP at the time, and annoying because it proved a difficult target to ‘beat’.

However the new design appears to represent an improvement right across the wind speed range and offers the prospect of being well balanced otherwise. Available as a plan for home construction and with the possibility of hull mouldings becoming available at some stage if we can tempt a builder to take the plunge.

The design has, necessarily, been drawn close to the limits of the class rules and will require careful building if it is to gain the advantages it should have. For example it will be necessary to check the building shadows before adding planks to ensure there are no ‘illegal’ hollows above the waterline. Likewise the displacement is close to the minimum and care will be required to ensure no displacement is lost during the fairing process. For these reasons ROMANZA should be seen as an alternative design to ROCOCO rather than as a replacement.

A plug and mould were under construction in 2013 (not at SAILSetc) and it is hoped hull mouldings may become available eventually.
SAILSETC      Graham & Lorna Bantock          141 high street kelvedon essex england co5 9aa