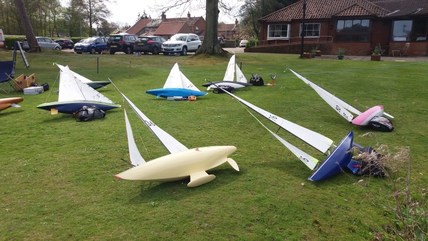 Ten competitors from four clubs came to Filby to compete for the Shearwater trophy.
Conditions were almost perfect with a NW 10 -14 knot wind. These conditions and direction are ideal for the Filby Water.
This allowed The Race team of Vinnie Zammit and Tony Garner to set a windward / leeward course, which at times with shifting winds proved very testing to the fleet.
Initially, Bernie Guest with his Ravenna proved difficult to beat winning the first 3 races. However Last year’s winner Terry Burton and John Hanton were hot on his heels. Also doing well was Class Captain Mike Ewart.
At lunchtime these four were dominating the proceedings with Terry 1st, Bernie 2nd, Mike third and John 4th. It must be noted that Terry success was largely due to winning the last 5 races before lunch.
After lunch the wind increased which made for some interesting sailing, with wind shifts causing quite a few changes in the fleet positions. 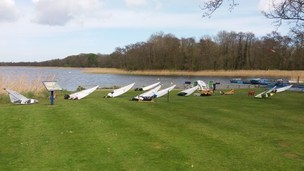 Unfortunately at this stage Geoff Earl’s boat had electrical problems and decided it did not want to play anymore.

Late afternoon saw the wind decreasing rapidly and with the threat of rain all competitors were relieved when the PRO called it a day after 17 races.
Results at the end of the day were similar to lunchtime, Terry 1st, John 2nd Mike 3rd and Bernie 4th. Liz Browne, our only lady competitor finished with a very creditable 8th. Well done Liz.

Mention must be made of the spirit in which all competitors conducted themselves during the whole event. All transgressors did their penalties without argument and with a good natured attitude. This can only bode well for the National 6 Metre Championships, which will be held at Norwich SC next month.