Report, Fleetwood Open Meeting 26th Jan 2020
​This first open event of the season was billed as an opportunity to try new parts, new configurations and different tuning.
Well someone took it a bit further than that !
The weather wasn’t being particularly cooperative offering a robust southerly with strong gusts and coming right through the town so that direction was variable with some huge flaws present. There was some rain about too but that was due to move through and the wind was forecast to clock more westerly as the day progressed. The rain was occasional and fairly light and died out by lunchtime. 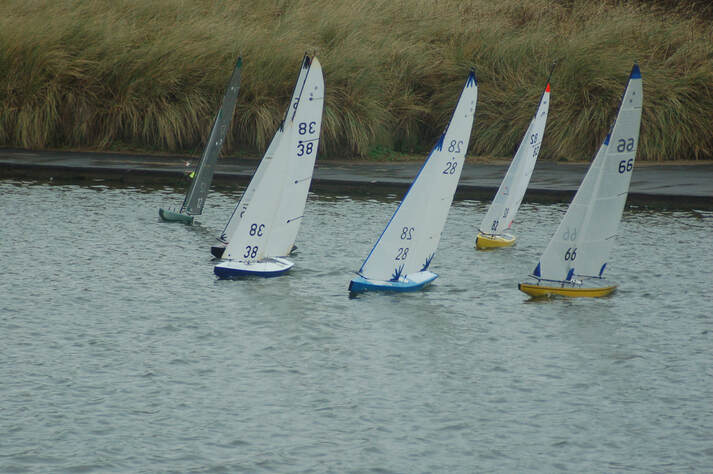 There were nine entries for the day. Just before the first heat the wind picked up some more and Derek Priestley wasn’t very optimistic about the ability of the six metres to stay the course, reckoning there would only be four finishers by the end of the first race of the day. It seemed that he might have a crystal ball in his back pocket as bad luck befell two boats even before the first race.

First, the club boat was launched but continued to sail in a straight line towards the bank, not answering the rudder. It had fallen off the rudder stock (and was subsequently recovered) but  meant it could play no further part. Sue Parkington was able to get some sailing in though with other boats.

​Then Bill Green made to launch his boat when it was caught by a hefty gust as he was letting go and took the rudder clean off against the concrete bank. Bill now occupies pole position in the bad luck stakes here at Fleetwood open meetings. We’re hoping he will be third time lucky next time so he can get some racing in. Fortunately he had his camera with him and took most of these nice pics for us. Thanks Bill.
John Taylor had arrived early to get his boat rigged and ready before departing to the local hospital to visit a close relative, leaving Drisky in the capable but unaccustomed hands of Rob Walsh, who had apparently been persuaded/commandeered/press-ganged the night before by John and Derek.

​Derek Priestley was sailing a borrowed ‘Seismick’ ( a Chris Dicks design) which is awaiting a significant overhaul including new foils and lead. Incidentally Chris made the spelling of Seismick with a 'k' to align it with some of his other contemporary designs which also ended ‘ick’ such as the IOM ‘Metric Magick (info. courtesy of Mark Dicks). 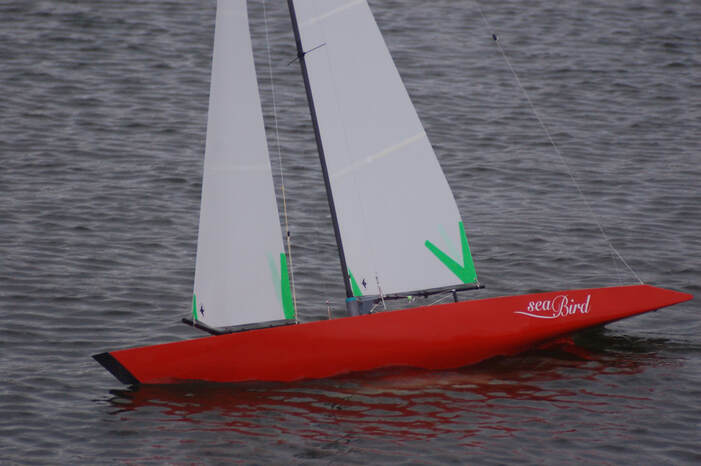 Is it a boat, is it a bird, can she fly?
​So, not content with merely trying out a few bits and bobs Damian Ackroyd brought along a whole new boat and not just any boat.
​
​The 3D printed plastic fantastic ‘Seabird’, which had been previewed at the MYA AGM took to the water for the first time​ under the watchful eye of its designer David Hollom. Not David’s first involvement in six metres it must be said - they were rather bigger ones before this though. It’s a welcome alternative design for six metre enthusiasts.

Attention to detail regarding the design and construction and how to get the best from the material was evident in Seabird and the construction method offers the possibility of further design iterations to perfect the package and to producing carbon fibre offspring in the coming year. Watch this space as they say. 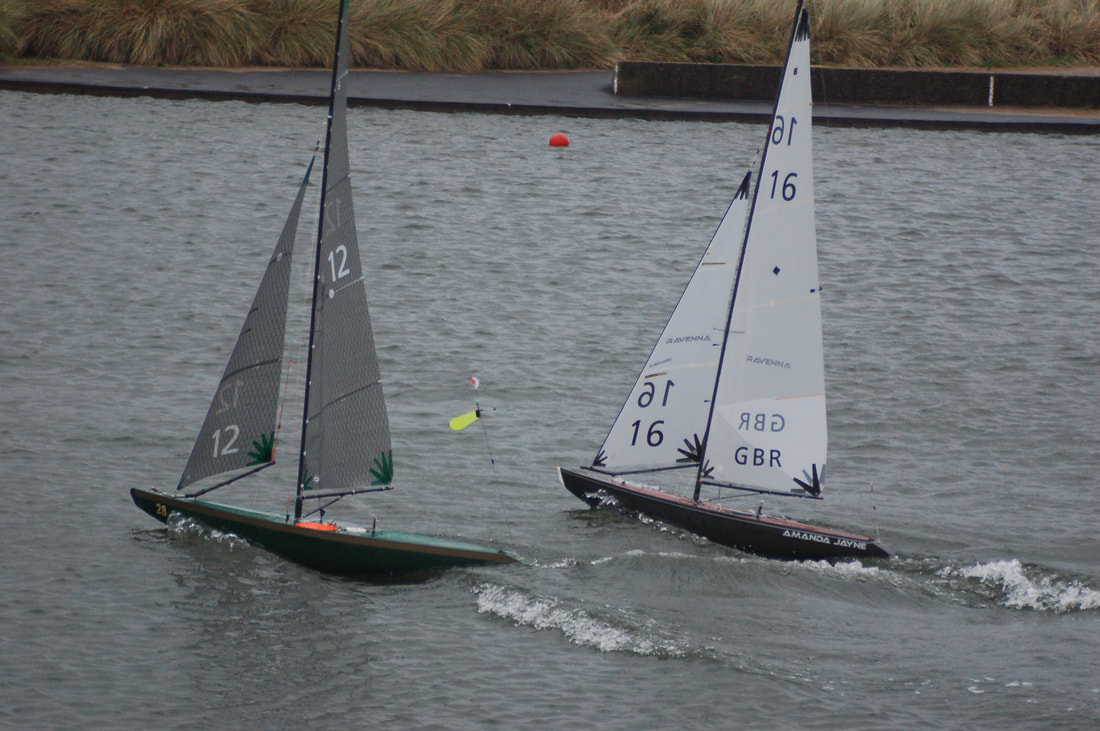 The Ravenna girls on the catwalk
​Of course not!
Five made it to the finish line in heat one and thereafter the fleet was gradually restored, returning to the core seven. The sailing was tricky upwind and fast downwind. Gradually the wind began clocking westwards and the course changed to a triangle/sausage of two laps with the windward mark less than halfway up the clubhouse shore. The wind also started to ease back some. 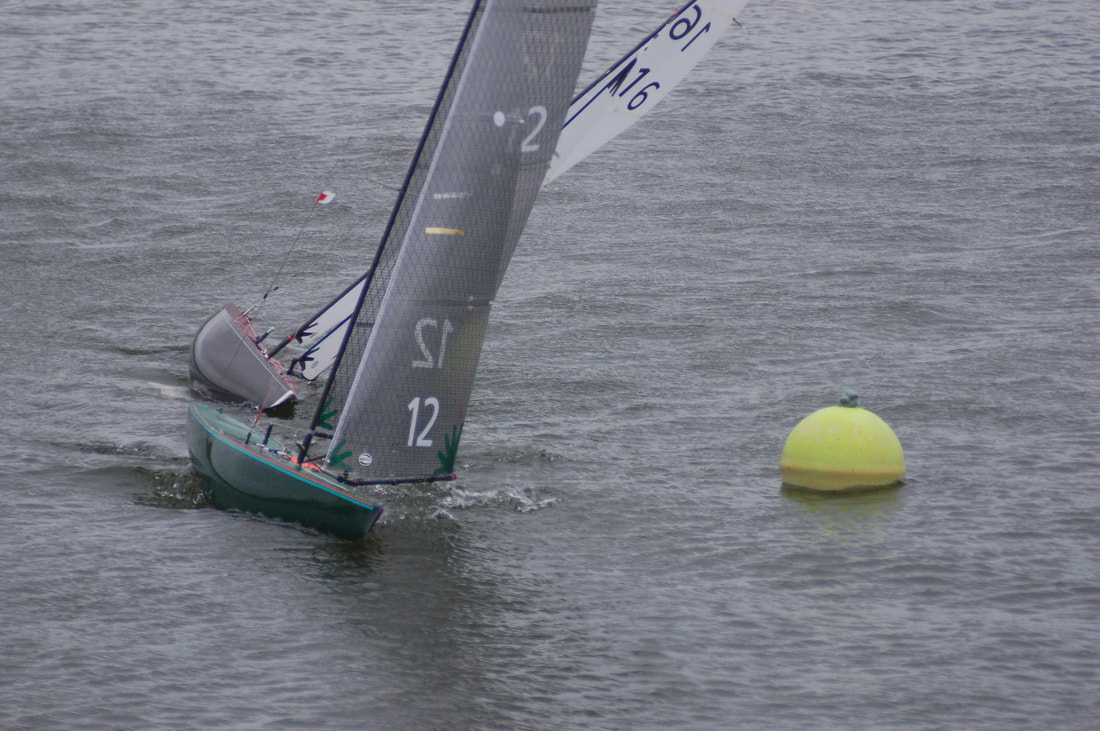 ​Seven races and a tea break were completed before lunch was called. Race three saw Derek somehow manage to keep the Seismick ahead of the chasers for a heartening win, while Mike Ewart put in some good consistent finishes. Rob had a battery problem in race six but managed to finish it and chalked up a couple of wins.  Damian and David H shared helming and started dialling in the new bird with improving results. Sue and Mike P shared Tallyman and David F took a second place in race six. Shaun put in four firsts and two seconds, plus a fourth after being over at the start line. 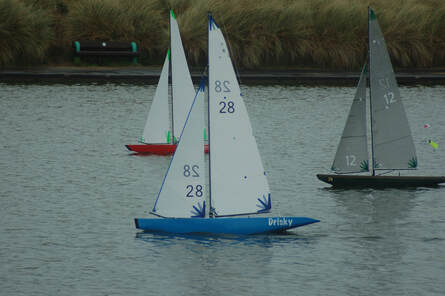 After a convivial lunch the situation had changed and for  the better. The wind had moved further round to more down the lake so that the windward mark was now more than half way down the shore giving a triangle-sausage and the wind had further eased back to a pleasant 10mph or thereabouts and became much more stable.
​After a few more heats the wind did the decent thing and moved to straight down the lake resulting in the final course change of a windward/leeward sausage using the full length of the lake. 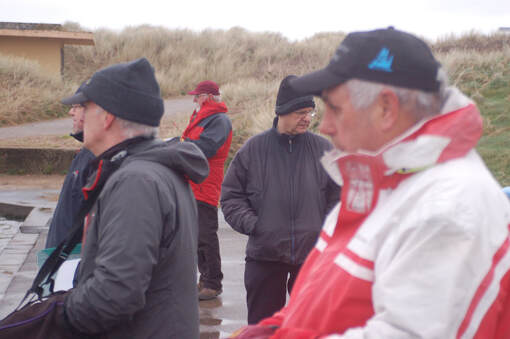 ​After lunch John Taylor had taken over on the sticks, trying out the tweaks he had made to Drisky and gained a consistent set of scores. However Shaun had the answers and continued to get clear of the fleet.
​
​Mike Ewart fell away a little in the second half of the day but still put in some third places. Damian and David tweaked Seabird and continued to improve.

​In the latter part of the afternoon some swapping of boats took place amongst skippers in the interests of experience and feedback. Those results stayed with the boat as nothing was likely to change the overall outcome. John scored a first place in the penultimate race sailing Seabird, while Damian did the same in the last race with Amanda Jayne.

Starter and scorer Trevor Bell added and subtracted the scores from the sixteen races to find us a result while Bob Jolly assisted with start line judging and other duties. Thanks to both for their time and diligence.

In third spot was class captain Mike Ewart from Two Islands.
Second was John Taylor and in first with twelve wins was Shaun Holbeche.
​
​All in all, an eventful day with various spectators coming by to watch the excellent sailing to be had.  Very enjoyable if you made it to the end and it can all be revisited in another guise on the 29th March when Fleetwood will be holding another open meeting with plenty of competitive open course sailing.

Just what six metres were made for!