The 'threatened' very light winds were present at Clayton Hill today for the 2015 running of the Sextant Trophy for 6 metre boats.
The Race Team member John Jones first moved some buoys to make it clear where there was certainty of encountering weed which has begun to appear in the lake.  That enabled Race Officer Henry Farley to set a port rounding triangle and sausage using most of the rest of the lake.  Thankfully very little weed was picked up during the racing though John Davies might argue as he found a large lump before the start of the first race which made its presence known as soon as he started.

A couple of boats, Vinnie Zammit's Ravenna and Derek Davies' Rococo, suffered jibs that were reluctant to set in the light winds though both went well when they did.  Cliff Daniels' Prismatic, something of a light wind special, did well when the wind was really light but if not in the right place at the right time still didn't get to the line before being overtaken by boats on a different route.  Geoff Earle's Rococo was usually one to be reckoned with and was more consistent than most for the first 3 races such that he led by 1 point from John with the Revival and Cliff with the Prismatic, when we stopped for a tea break.

From Race 4 onwards John and the planked Revival dominated no doubt due to having the ideal boat for the conditions coupled with local knowledge and no small smattering of skill.  At lunchtime after Race 5,  by which time the first discard kicked in, John led with 5 points from Geoff with 7 and Cliff and Mike with 11 points.

We did 3 more race which took us to the second discard but though the race finishing positions changed a bit, the overall order didn't.  By this time the wind had almost completely disappeared so all agreed to stop racing. Thus John was a clear winner with Geoff and Cliff in 2nd and 3rd places.

This was the last round of the 2002 Trophy Series where all 3 events count for the final points tally.  Potentially Mike Ewart could have won the series if he had won the event but it was not to be so Colin Goodman having won both of the previous events takes the title.  As he was not at the event it will be presented at the National Championship at Dovercourt next month.
The final table shows little change from that after the 2nd round apart from Geoff Earle with his second place today climbing over Mike Ewart and Mark Holt. 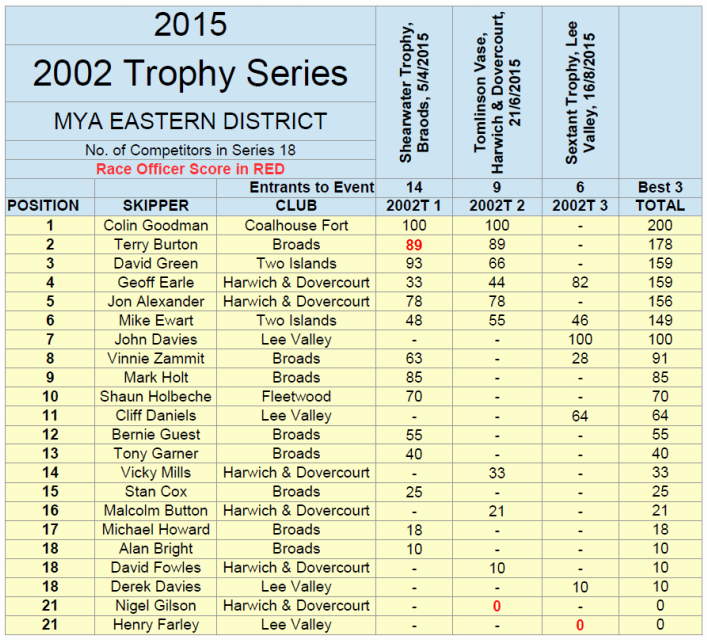