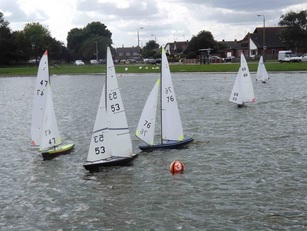 A variable  W to SW wind greeted the nine skippers who represented four clubs in this, the second race in this year's 2002T Series.

OOD set a traditional Triangle and Sausage Course but quickly introduced a dogleg between the spreader buoy and the leeward mark to make a much more interesting and challenging tasl for the competitiors.

Colin Goodman of Coalhouse Fort soon showed why he had won the first eventof this series at the Broads as it was the fifth race before Jon Alexander of the host club was able to take line honours from him, whilst Terry Burton of the Broads Club was the winner of the eighth and ninth races. 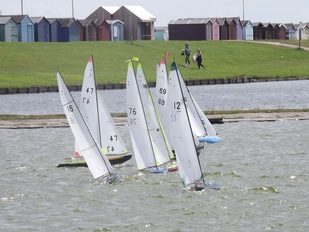 As the day progressed David Fowles, sailing his new boat in a District event for the first time, decided to stop competing in the freshening wind, meanwhile Malcolm Button, the man credited with introducing six metre sailing to the present Harwich & Dovercourt Model Boat Club suffered several gear failures which spoilt his day.

Colin continued to generally dominate proceedings with Terry and Jon in close contention for second place. Vicki Mills and Geof Earle sailing on home waters had some very close racing and MYA Class Capt. Mike Ewart and Dave Green both from Two Islands RYC were also in the mix, Dave's consitent upper to mid fleet results saw him pip Mike despite him winning race fourteen to place fourth overall.
Colin continued to read the shifts throughout a difficult afternoon to win by a good margin with Terry beating Jon into second place on countback.

The Race Team and the Competitors all felt they had an enjoyable day, with competitors answering hails and all incidents being resolved without any outside mediation.